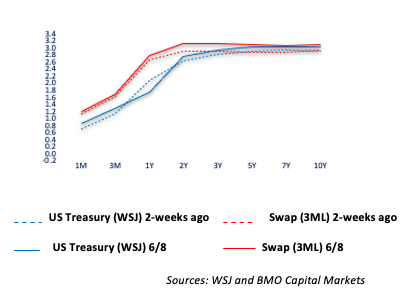 -The World Bank lowered its yearly growth forecast for the global economy from 4.1% to 2.9%, significantly lower than the 2021 total of 5.7%. The World Bank cited the ongoing war in Ukraine and lingering Covid-19 pandemic effects as strong disruptors of the economy.

– According to the World Bank, the mood around growth forecasts for subsequent years has also dampened, hinting that to some degree, supply-chain issues, the war in Ukraine, and inflation are here to stay.

– Testifying before the Senate Finance Committee on Tuesday, Treasury Secretary Janet Yellen expressed her concerns about a possible extended period of elevated inflation. The Biden Administration’s original forecast for inflation’s average stood at 4.7%; Yellen added that the number will grow,

– Her comments come as supply-chain issues remain persistent across the world, the war in Ukraine has not shown any signs of slowing down, and high gas prices could all be to blame for slowing down global growth.

– During Apple’s developer’s conference Monday, the company announced its plans to create a Buy Now, Pay Later service named Apple Pay Later. This extended Apple’s recent streak of developing FinTech services as later this month, the company will introduce a feature that will give people the ability to pay another individual by simply tapping iPhones.

– The news of this development sent several competing, Buy Now, Pay Later companies’ stock prices tumbling; Affirm was down 5% on Monday and 4% on Tuesday, Apple closed down 1% Monday but rallied on Tuesday, regaining 2.1% in the market.