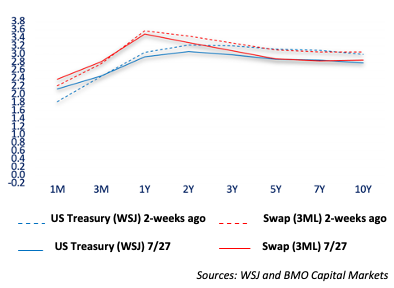 -The International Monetary Fund adjusted its growth forecast from its initial 4.9% estimate to its current 3.2% projection. Economic growth accelerated by 6.1% last year.

-The IMF cited soaring inflation, the war in Ukraine, and lockdowns slowing China’s growth engine as a reason for its downturn.

-The IMF offered additional cause for concern stating that matters could get worse – the European energy crisis, stubborn inflation, and debt distress facing struggling countries could hinder economic growth even further.

Big Week Ahead for Economic Outlook

-The Federal Reserve will announce its plans regarding its interest rate hikes, experts expect a 75bp hike will be in store, suggesting the Fed has more work to be done regarding the fight against inflation.

-The Commerce Department will release data on Thursday, giving insights into whether GDP declined for the second straight month. Economists believe GDP edged slightly higher in the second quarter.

-The total number of new applications for unemployment benefits will be released Thursday, providing an outlook on the economy’s overall health.

-The Federal Reserve’s preferred measuring index on inflation, the personal consumption expenditure index, will also be released Friday – the index reading for core prices is expected to show that price increases grew in June compared to May.

-Following larger than expected losses, former CEO Thomas Gottstein resigned earlier this week. Credit Suisse announced the hiring of Ulrich Körner, who previously served as Head of Asset Management for the bank. Körner will look to head a fundamental transition for the investment bank.

-Credit Suisse is amid a turbulent quarter as losses mounted to $1.65 billion in only the second quarter alone, marking the third straight quarter of losses. Gottstein cited geopolitical, macroeconomic, and market headwinds as factors for the investment bank’s significant losses.