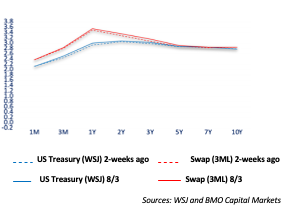 -Job openings estimated to remain strong, but signs point to an easing in the labor market in accordance with broader economic slowdown.

-Economists surveyed by the Wall Street Journal estimate the Labor Department will report 11 million job openings in June, below historical 11.9 million in March.

-Unemployed individuals looking for work in June was down to 5.9 million, half of the number of reported job openings. The Fed will look for an easing job market to cool inflation.

Eurozone On Path to Recovery

-Despite Russia’s invasion of Ukraine spiking energy and food costs, the Eurozone grew at a higher rate than estimates predicted. The world’s third largest economy was helped by the lifting of most pandemic restrictions during the first half of this year, providing a lift to business and consumer activity.

-Last Friday, the European Union’s statistics agency said the combined GDP of the eurozone members was 0.7% higher in the second quarter than the first and 4% higher than last year’s.

-There are still many issues the Eurozone must juggle,  Russia’s invasion of Ukraine is placing extreme pressure on countries heavily dependent on Russia’s energy exports. Additionally, European economies are still having to deal with constant supply chain issues and crippling inflation.

-During a speech in New York on Tuesday, St. Louis Fed President James Bullard stated that he believed the U.S. economy could avoid a recession despite raising interest rates. Given higher than expected inflation data received in the second quarter, Bullard believes the fed funds rate likely will have to stretch to 3.75%-4% by year’s end. The current fed funds rate stands at 2.25%-2.5%.

-Despite the Fed’s uphill battle in corralling inflation, Bullard believes the Fed’s credibility is what will achieve a soft landing. Marking a stark contrast between today’s Fed and that of Volcker’s in the late 70s and early 80s. Bullard went on to say, “That credibility didn’t exist in the earlier era, we have a lot more credibility than we used to have.”