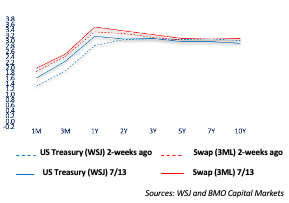 -Inflation beat estimates yet again; the CPI reached 9.1%, a four-decade high. Economists had estimated that the CPI rose to 8.8%.

-Additionally, the core-CPI, which excludes volatile food and energy components, rose 5.9% slightly below May’s 6%. This all but guarantees a 75bps rate-hike by the Federal Reserve later this month. Fed Chairman Jerome Powell has repeatedly stated that the Fed won’t ease off interest rate-hikes until it sees strong and reliable data on cooling inflation, today’s data was far from that.

-Due to recent struggles with inflation, an energy crisis tied to the Russian invasion of Ukraine, and a looming recession, the Euro has fallen 12% to the U.S. dollar. For the first time in 20 years, the U.S. dollar and the Euro hold equal value.

-Not only is the U.S. dollar up 12% on the Euro, but it has also gained 13% on the British pound and 19% on the Japanese yen. Largely, this is thanks to the Federal Reserve. Later this month, the Federal Reserve is set to announce a 75bps rate hike for the second month in a row. The European Central Bank is still yet to make its first interest rate hike, and The Bank of Japan is still buying assets.

-Once the Federal Reserve eases its quantitative tightening policy and stops lifting interest rates, the U.S dollar’s upward trend could subside. Until then, expect the U.S. dollar to gain on the Euro and the rest of the world.

-In April of this year, Elon Musk and Twitter struck a deal worth $44 billion to take the social media platform private. Musk’s attempt to buy Twitter was huge news as it would be the third biggest purchase of a tech company ever, only behind Microsoft’s acquisition of Activision Blizzard and Dell’s purchase of EMC. Since initial reports of a deal being struck, multiple stories have broken, many citing Musk’s frustrations on the lack of transparency provided by Twitter and their user data.
-Musk stated that he would seek to terminate the deal if Twitter couldn’t provide reliable and transparent data regarding how many “bots” were registered as daily users. Opening up the possibility of a significantly skewed number of daily users, which is one of the if not the largest indicators of growth for social media platforms.