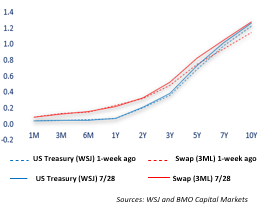 -The central bank declared last year that it would continue to purchase $120 billion in Treasurys and mortgage-backed securities monthly until achieving low unemployment and reaching its inflation goal of 2%.

-The Fed will release an updated policy statement at 2 p.m. EDT Wednesday.

-The University of Pennsylvania business school, one of the most highly ranked in the U.S., announced that 52% of its fall cohort will be female. It will mark its highest percentage of women enrolled in its 140-year history.

-Women make up most law school and medical students in the U.S. and have earned more bachelor’s degrees than men in the U.S. since the 1980s. The increase in M.B.A candidates, however, finally shows progress towards advancing women into leadership roles through access to higher level business education.

-The German bank delivered a 4th consecutive quarterly profit for the first time since 2012. The bank beat expectations and outperformed rivals in fixed income trading.

-Like JPMorgan and other banks this quarter, Deutsche Bank’s optimistic earnings results benefited from a sharp drop in provisions for loans at risk of souring during the pandemic.