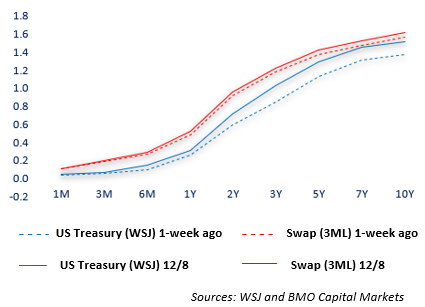 A Major Shift Could Lie Ahead for the Federal Reserve

-The Fed is likely to decide to double the pace of its taper to $30 billion a month at its December meeting next week.

-Initial discussions about raising interest rates could also be added as a topic of discussion. The additional Omicron wave of COVID-19 has applied more pressure on the Fed to act faster to avoid inflation.

-Saule Omarova has withdrawn her name from consideration for the comptroller of the currency after concerns from Republican senators about her writings as a legal scholar, as well as her background of being raised in the former Soviet Union.

-Omarova ultimately lost Democratic support in Virginia and Montana due to her opposition to a bill that had lifted some regulatory restrictions on banks.

-Goldman Sachs’ CEO David Solomon added, “There’s a reasonable chance that we have inflation above trend for a period, but it does not mean it has to be like the 1970s. We will need to be cautious and manage risk appropriately.”

-Sports Illustrated wrote that “few teams have captured the heart of its city en route to a long-awaited championship” as the reason the Braves took home this year’s award. The Braves defeated the Astros 7-0 in game 6 to clinch the title.