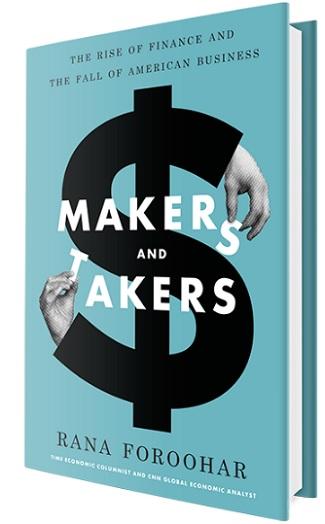 Recommendation:
“Makers and Takers” by Rana Foroohar provides a historical background to show how deregulation shaped risky behavior and a lack of transparency in the financial system. It provides a simple, optimistic view of how to reestablish skin in the game and re-purpose finance for its original intentions.

Summary:
Before regulations in the financial sector were loosened, the sole purpose of finance was to support business and fuel economic growth. In an age when companies have become banks and vice versa, we should aim to allow finance to focus on its original goal. The first step Foroohar suggests is reducing the complexity of banking and financial regulation. In addition, regulation law has become far from transparent. With more vague regulation has only come a host of new loopholes to further blur the lines between commercial and investment banking. Finally, as Taleb has signaled, bankers and companies need skin in the game. By forcing big players to invest their own stake and own the burden of risk, a level of ownership and responsibility can be reestablished to properly structure incentives.

Keenan Hickton
Mr. Hickton serves as a project analyst for Abelian Partners. He had served in similar roles as a student-consultant for Coca-Cola Company and as a summer associate for The University of Pittsburgh Medical Center. He is responsible for document creation, analysis, model building, formal document writing, project management, procedures, business plans, and more. Mr. Hickton graduated from Emory University's Goizueta Business School, where he earned his BBA Degree with a Concentration in Finance. Mr. Hickton was also 3x Captain of the Emory Golf Team.
Previous Post
Predictive Analytics
Next Post
The Wealth of Nations